Conflict journalism, the local press and a debate on the role of modern media in democracy took center stage on JW Day 4

International Journalism Week 2022 wraps up today with the announcement of iMEdD's incubator call 2023, the European Press Awards community event and a panel discussion dedicated to Press Freedom, Independence and Sustainability

Day 4 saw Christiane Amanpour talk to Valerie Biden Owens about the role of modern media in democracy, and Ukrainian reporters discuss the challenges of reporting in a country at war with Greek war correspondents in a panel entitled "Journalism in War Time.” 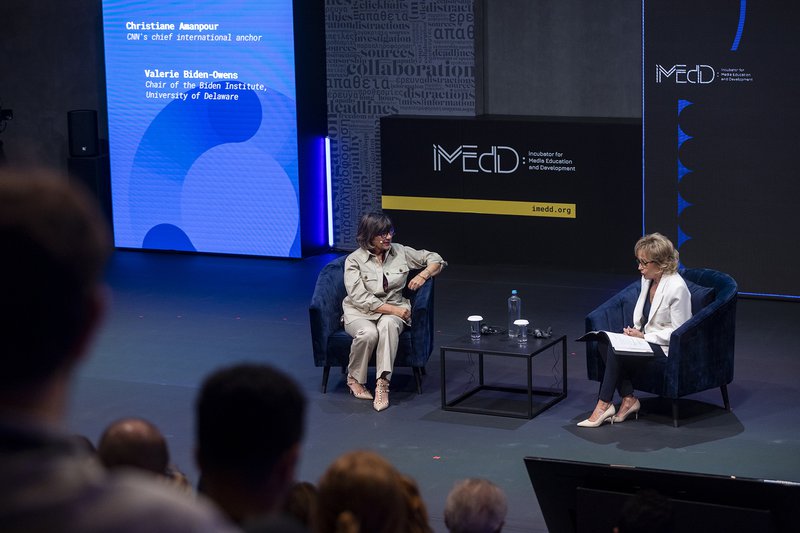 The Media Village featured a Solomon discussion on mental health in journalism, La Maison des Journalistes' project supporting exiled journalists, a presentation of Twitter analytics tools developed by the Data and Web Science Lab, and BIRN BiH's project "The Lives behind the Fields of Death.”
Attendees were also given a behind-the-scenes virtual tour of NPR’s newsroom and studios and found out about Reporters without Borders' Journalism Trust Initiative (JTI).
A discussion on local news, its dynamics and challenges piqued the interest of journalists from Greece and abroad, while CNN’s chief international anchor Christiane Amanpour explored the role of media in democracy in a packed auditorium. The discussion was moderated by Valerie Biden Owens, Chair of the Biden Institute at the Biden School.

During the discussion Christiane Amanpour mentioned that “I learned throughout my reporting whether it was in Bosnia or even in Iran or other places throughout the 90s and the early 2000s that actually journalists in many parts of the world were on the front lines of reform the democracy in the countries. I genuinely believe that we as the press are the fourth power of the state, and we have a great responsibility. Without free journalism, societies are not healthy.”
The panel entitled "Journalists at War" featured Senior Editor Oleksiy Sorokin and Chief Development Officer Zakhar Protsiuk at Ukraine’s Kyiv Independent, who were joined by Head of Foreign News at Antenna TV Nikolas Vafiadis and other Greek war correspondents to discuss the challenges of reporting from the battlefield.
Zakhar Protsiuk mentioned that “The most important value for us, is editorial independence that we only serve our readers and our community and no one else.” 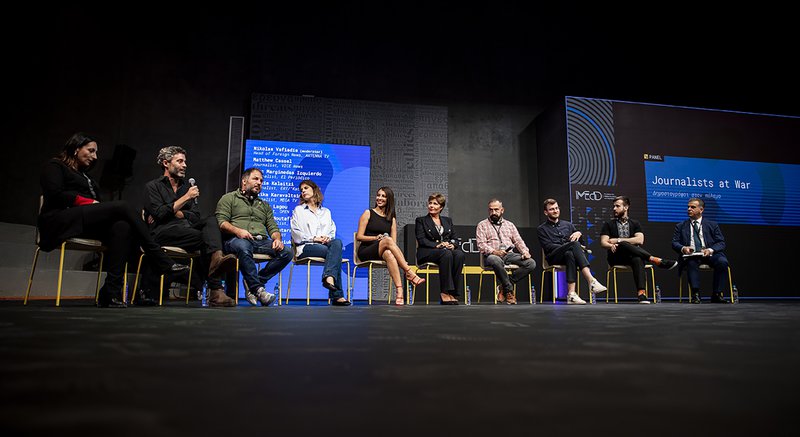 The programme concluded with the screening of the documentary "The Killing of a Journalist", by Matt Sarnecki curated by the Thessaloniki Film Festival.

International Journalism Week 2022 comes to a close today. At 15:00, the European Press Prize will host an open networking event in the Media Village, shortly followed by the announcement of iMEdD incubator’s next theme and information on its open call.
The panel discussion on Press Freedom, Independence and Sustainability is highly anticipated. Participants include Anton Troianovski, Moscow Bureau Chief for the New York Times, Pavol Szalai, Head of RSF’s EU and Balkans Desk and many others.

International Journalism Week 2022 will wrap up by giving the floor to the next generation of leaders, students from the Delaware University and the Aristotle University. The session will be moderated by Anna-Kynthia Bousdoukou, iMEdD Founder & Managing Director, SNF Dialogues Executive Director and journalist.

Online registration is now closed, but you can still register at the venue during the conference.