“There is a natural human instinct which in times of crisis craves a panacea…,” Lucy Wilcox Adams wrote in her 1933 article “Salvaging Democracy.” She highlighted how the world had seen in “the last few years…the sweeping victory of Fascism” across Europe. “Most human institutions have at one time or other been the victims of the craving for a formula of salvation,” Adams wrote, and “as governments in Europe turn helplessly toward dictatorship and tyranny…. education is essential if we are to save democracy in America.”

In some significant ways, we have observed the decline of democracy across the world and at home in the United States. Reputable sources such as Freedom House and the Varieties of Democracy project highlight this along with the press covering this topic with such explicit statements such as “Democracy, are you OK?” 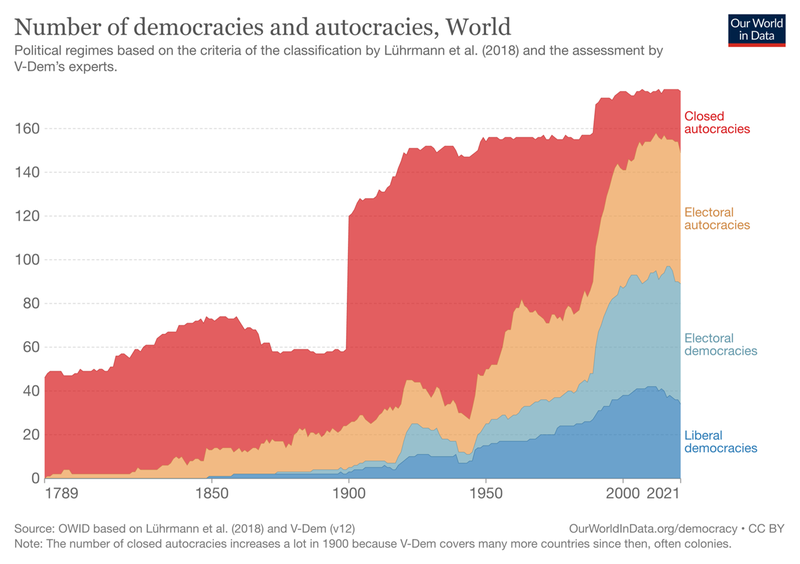 Earlier this month, President Biden spoke in front of Independence National Historical Park in Philadelphia about the “soul of the nation” and the threat to democracy. While some politicians and journalists spoke about the partisan nature of his speech, President Biden touched on a critically important issue: the option between democracy and authoritarianism, not simply left/right, progressive/conservative, or Democratic/Republican divides. He spoke to more the underlying system of liberal democracy, the rule of law. This is what Francis Fukuyama refers to as classic liberalism in his latest book Liberalism and Its Discontents: “a way to regulating violence and allowing diverse populations to live peacefully with one another.” We want to have policy differences, but we need to step back from extremism that doesn’t allow us to engage substantively as people with different views and positions. And looking back to 1937, just six years after Adams’ writing about education’s role in saving democracy, we are reminded of how easily our own history as the United States can easily be interwoven with authoritarianism and hate as demonstrated by the documentary footage of “A Night at the Garden.” Civil discourse has relevance to thinking about politics and public policy because it helps to buffer abandonment of the commons when it would be easier to retreat to our unfettered enclaves or ideological bubbles.

As we celebrate the UN International Day of Democracy during a moment of global democratic decline, it’s timely to have the UN focus on the importance of media freedom. We face dual challenges in democracy today: having access to information and trusting in journalists to communicate what’s happening as accurately as possible. Since its inception, SNF Ithaca has focused on civil discourse and civic engagement, but we’re broadening our work to include the mediated public square since it informs so much about democratic citizenship. We must understand what shapes what we know, how we engage others, and how we act in response to issues facing communities locally and globally.

In early October, a group of Biden School faculty, administrators, and students will participate in the International Journalism Week hosted by the Incubator for Media Education and Development (iMEdD) in Athens, Greece. The conference theme is “A Matter of Trust,” focusing on the role of media in democracy, especially in such a challenging time as this moment.

Second, our SNF Ithaca Student Leaders will observe sessions and serve on a panel with five students from Aristotle University of Thessaloniki at the end of the conference offering "Student Voices: Perspectives from the Next Generation on the Role of Media in Democracy." They will share their insights from presentations and what they’ve learned from the entire experience. Significantly, all the students involved comes from different disciplinary backgrounds other than journalism. As we think about the mediated public square, it’s essential that some of the leaders in the field of journalism hear from those shaped by the work they do. Informing this “Student Voices” panel with the SNF Ithaca Student Leaders and their Greek student colleagues will be SNF Ithaca Fellow John Della Volpe, director of polling at the Harvard Kennedy School Institute of Politics and author of the recently published book Fight: How Gen Z is Channeling Their Fear and Passion to Save America. Della Volpe will work alongside Catherine McLaughlin, executive director of the Biden Institute, and Dr. Pablo McConnie-Saad, program manager for SNF Ithaca, to help students reflect on their experience and share it with conference participants. As we think about the future role of journalism in democracy, what’s better than hearing from young people who keep up to date with current events through TikTok rather than the evening news?

And finally, as we think about the role of journalists in democracy, we have the opportunity to have one of the leading voices in the field join SNF Ithaca at iMEdD: Christiane Amanpour. She is the Chief International Anchor and host of CNN International's nightly interview program Amanpour. Amanpour is also the host of Amanpour & Company on PBS. She will be in conversation with the Biden School’s Biden Institute Chair Valerie Biden Owens about the topic of "The Role of Media in Democracy." Six years ago, Amanpour made a point about how she saw her work as a journalist about being truthful, not neutral. As we look at upcoming elections and beyond, thinking about the democratic role of journalism and what can be done to bolster this battered institution is essential.

If Lucy Wilcox Adams was correct in 1933 about education being essential to saving democracy, then we must collectively double down on preparing young people for active citizenship. But the truth is, we all need to continually be learning to be more informed and engaged citizens, regardless of age. There are no panaceas. This is why we must all cultivate and defend a culture of democracy.